......He was a guest tenor in many European countries: Italy, England, France, Austria, Sweden, Hungary, Greece, Germany, Romania, Bulgaria. He was also awarded at several prominent solo singing competitions and he released eleven albums on CDs, of which: two CDs of the „Most beautiful Napolitan and Spanish songs“ (RTS production) and two CDs „Pearls of Serbian artistic solo songs“, CD „Strong branches of almonds“, „Anthology of Serbian artistic solo song“ and finally „Songs and arias which captured the world“. Very often he performs works of contemporary Serbian composers, and many of them were recorded and archived as permanent recordings in RTS. He used to perform at significant festivals: BEMUS, „Marble and sounds“, „NOMUS“, „Mokranjac“, „Dubrovnik Summer Festival“, „Sindjelic“ etc.

......He recorded for JRT, RTS, RTS NS, PGP RTS, Italian RAI. As far as his reviews are concerned, critics from almost all the daily and monthly newspapers (Politika, Borba, Blic, Glas javnosti, Novosti etc) have underlined the beauty of his expressive virile voice, his powerful high tones and extraordinary diction, emphasizing that his bell-canto education had already put him in the higher strata of singers. 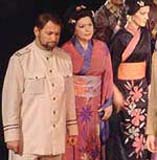 ......Recently, after many solo performances of G.Verdi's „Requiem“ in Italy, L.v.Beethoven's „Missa Solemnis“, Theodorakis' „Requiem“ in Greece, Zoltan Kodalj's „Missa Brevis“, the role of Pinkerton in opera „Madam Butterfly“, a series of concerts dedicated to Serbian artistic solo songs, as well as magical interpretations of the most famous Napolitan, Russian, Greek, Serbian, Mexican songs and arias, it has been emphasized that Slavko Nikolic has become a leading tenor of this region. He has captured the public with his voice in over one hundred of cities in Serbia, Montenegro, neighbouring countries and EU countries where, as the critics say, he was always met with ovations, and in many cities his concerts had been repeated upon request of public. He was legendary soloist of the artistic ensemble of „Yugoslav Army“ from 1985. till 1997, where his solos were always performed in front of full auditorium.

......Awards: he got many rewards as an artist who is most credited in Serbia for nurturing and promoting Serbian solo

songs. He was appraised by the magazine „Musica classica“ for the year 2011. as a founder and artistic director of the festival „Serbian solo song - Mladenovac“ (2011, 2012). He also got award in the same year titled „Master's seal“ – Serbian crowns.

......Music reviews: Dr Gordana Krajacic, music critic, in her new book „Music pastels“ says: „By solving the secret of breathing, Slavko Nikolic has completely mastered his breath and appoggio. This way, he took the total control of his vocal instrument and the extreme ease in emission and linking of all tones that includes his voice diapason, ranging from spino to tenor, has enabled him to put all his pure and primordial musicality in the service of an authentic artistic expression.

......His recognizable voice that is set upon the best principles of bellcanto technique is been marked by beauty, sonority of high tones, masculine expressiveness, extraordinary technique and diction. In this way his interpretations of different works from different epoches, combined with expressive claritya and inspired tinting, always have its unmistakable stylistic preference.
Performances: He used to perform and collaborate with many famous artists such as Radmila Bakocevic, Gordana Jeftovic , Višnja Pavlovic , Goran Gligoric , Dunja Simic , Nikola Mitic , Živan Saramandic , Željko Lucic , Jadranka Jovanovic , Suzana Šuvakovic -Savic etc.
For the full 40 years, Slavko Nikolic is on the scene. He held over one thousand of concerts and he is one of the most significant promoters of Serbian cultural heritage.